Under the leadership of Pēteris Zariņš, with the assistance of Arnis Sprancmanis as the project’s treasurer and with your contributions and help, we are continuing to provide computers and educational materials to schools in Latvia.

In 1935 the President of Latvia Kārlis Ulmanis gave a now famous speech urging the population to give books to the local schools. What followed was a major institution in Latvia, whereby every January people were requested to donate books to their schools. Let us follow this old Latvian tradition!

We again encourage you to send a donation to our school improvement project. Recommend a school that has a special significance to you – maybe the school you or your parents or grandparents attended. We will evaluate the school’s needs, and provide support as justified, taking care of all formalities.

The funding allocated by the Latvian government and local municipalities does not meet all needs of the schools, and lately there has been a specific need for books. The schools need also funds for student activities and cultural events. Since schools in Latvia are small in comparison to the size of schools in America, a relatively modest contribution can provide a significant impact on the school’s budget.

Absent a specific recommendation, consider adding $50 (or more) to your annual TILTS contribution for our school improvement project. Donations in USA are tax-deductible. We will let you know how your gift was used. If you would like to contribute, please contact

During the lifetime of this program, TILTS has supplied over 500 computers and other teaching materials to over 100 schools in Latvia and six computers to Latvian schools in Siberia. 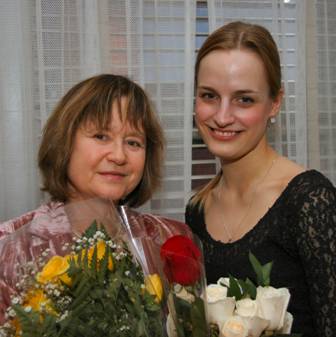 The ensemble “Zeļļi” gave a tour from April 14 to May 12, covering nine Latvian centers in NE USA. The attendance at the concerts ranged from 50 to 170, and a total of some 820 people heard the performances. The tour was supported by a $2,500 grant from the American Latvian Association (ALA), and, with this grant, both expenses and income were approximately $12,000. The feedback from listeners was very positive. Jānis Students, assisted by Jānis Bībelnieks, was responsible for the tour.

The author Anna Žigure, former ambassador of Latvia to Estonia and Finland, gave the lecture “Latvia after the Election of the Ninth Saeima” on March 3 as part of the TILTS annual meeting event, followed by lectures Washington, DC and Philadelphia. It gave a good insight of the political life in Latvia.

What Type of Play to Choose?

The play “Dzīvīte, dzīvīte” is about life in Latvia in the Soviet days, and reaction by some viewers was negative. This illustrates the difficulties TILTS faces in the selection of an appropriate production.

We would like to present a play by a Latvian author from a theater in Latvia; transportation costs limit the number of actors to six, and this year we preferred a comedy. In order to select this year's production, Marcis Voldiņš, the tour's organizer, made a trip to Riga (at his own expense!), saw 12 shows and recommended this play as the most suitable. Subsequently, an additional five people saw the play and confirmed that this was the most appropriate, if not ideal, choice.

TILTS then had to decide between waiting for he ideal production or picking the best that Latvia currently offered. We decided to to present to our viewers in America the most suitable production available. We plan to take this position in the future also, even through some viewers occasionally may feel disappointed.

An ensemble from Dailes Teātris from Riga made a tour of 14 Latvian communities in September and October with the comedy “Dzīvīte, dzīvīte” by Jānis Jurkāns, starting with Boston, New York and Priedaine and ending with San Francisco, Los Angeles, Washington, DC and St. Petersburg, FL. The ensemble traveled in a rented minibus on the east coast, but by plane to the west and to Florida. The attendance at each performance was between 60 and 300, and a total of some 1,650 people saw the play. In spite of grants from ALA-KF and Latvia Theatre Professionals Association, receipts did not match the expenses of $23,000, and TILTS had to subsidize the tour with $1,600. Marcis Voldiņš organized the tour.

The Exceptional Young Artists Fund, under the leadership of Laila Robiņa and with the participation of Baiba Pinne un Jānis Cigūzis, in 2007 made a grant of $800 to:

Contributions to the Fund can be made by sending a check, written to “Latvian Cultural Association TILTS, Inc.”, to

In its lifetime, the Exceptional Young Artists Fund has awarded a total of over $100,000 to over 30 young artists

The History Projects Fund, managed by Lilita Bergs with the assistance of Aivars Keire and Baiba Pinne, has received in the period between its creation in 2006 and December 31, 2007 contributions from 34 donors – 27 from donors in the USA, 3 from Canada, 3 from Australia and 1 from Latvia. A total of $5,180 has been received.

The fund currently is accepting donations to cover the expenses of Anna Žigure in the preparation of her book, originally called “Eslingena,” about the Latvian Displaced Persons (DP) camps in Germany following the Second World War. The current name of the forthcoming book is “Viņi”. Her plan is to cover the lives of people, in the form of a novel, after the people left Latvia in 1944-1945 to escape the advancing soviet army and before they left the camps for overseas countries around 1950.

Contributions to the Fund can be made by sending a check, written to “Latvian Cultural Association TILTS, Inc.”, to

To facilitate interaction with and among people who have moved to Latvia from the West, particularly among the members of TILTS, TILTS arranged two gatherings in Riga:

In 2007 TILTS board awarded the following financial support:

We are gratified that, on the basis of our initiative or with our support, the President of Latvia has bestowed recognition to the following:

Triju Zvaigžņu ordenis (The Order of the Three Stars) is the highest recognition in Latvia, and Atzinības krusts (The Cross of Merit) is awarded by the President for outstanding service to the country.

A Significant Donation to TILTS

TILTS is very pleased to have received a donation of $6,000 from the Elizabeth-Newark Latvian Church, which was part of the residual assets upon the dissolution of the church. TILTS is particularly honored for the statement of recognition for the significance of its work implicit in the donation.