Our best wishes for a prosperous and healthy New Year!

We would like to give you here a brief review of our major activities of 2008 and our plans for 2009. To those of you who have been supporting TILTS for many years, thank you for your trust and please continue to do so in the future.

We are sending this review also to many who are not yet TILTS members, particularly to people who have recently arrived in the USA from Latvia. One of the aims of TILTS, which are described in more detail on the last page, is to help people of Latvian heritage preserve their culture and keep their Latvian identity, and one of the ways TILTS accomplishes this is by arranging tours of Latvian theatre and music ensembles. Please support TILTS – become a TILTS member and attend performances sponsored by TILTS. By attending such performances you are providing financial support for the tours and improving our ability to arrange visits by the most popular artists.

In the last few years most of the tours arranged by TILTS were for performers from Latvia. Starting with 2008, the USA government has introduced new regulations and procedures for the admission of performers from abroad by requiring Petition I-129/P and the possession of the P visa. The paperwork for the new procedure, which is stated to be for the purpose of homeland security, requires detailed information on the proposed tour and an approval by the respective US artist union. The procurement of the visa may take up to half a year and incur a cost of over $1,000. As a result, the process has to be started well in advance and has to consider the possibility of rejection, in which case performances and travel arrangements have to be cancelled. This places a significant burden on those arranging the tours and adds to the cost. We will continue to arrange tours by artists from Latvia, but because of the additional work and cost we may have to forsake some opportunities.

We started this program in 1993 with the goal of providing computers to schools in Latvia. This was a period when acquisition of computers became popular for schools in the USA, but was not yet economically feasible in Latvia, which just few years earlier had emerged from Soviet occupation. Since then, TILTS has helped some 150 schools by procuring for them some 500 computers and other teaching materials worth approximately $350,000.

The dire need for computers in schools in Latvia now has been satisfied, and the Latvian government is in a better position to supply schools with the necessary technology. Accordingly, there is now significantly less interest in this TILTS project. In view of this, TILTS will not continue this program and will not in the future actively solicit funds for schools in Latvia. We will, however, try to respond to specific requests, and, if TILTS receives a significant contribution for this purpose, we will act accordingly.

Here is a short history of this program. We started “Procurement of Computers for Schools in Latvia” under the leadership of Lauma Upelniece Katis and Elize Linauts Korn, and in 1993 we signed an agreement of cooperation with the Latvia’s Ministry of Education and Science. We collected new and used computers and peripheral equipment from companies and individuals, and we requested funds from charitable foundations. In the first five years we obtained some $200,000 for some 400 computers. The Ministry in Latvia limited its participation to the construction of the necessary classroom facilities. We cooperated with “Cerība” – a charitable organization established by Ivars Kalme, and we asked Latvians for contributions to equip the schools that they had attended.

In 2001 Pēteris Zariņš and Edīte Irbe took over the program. At this time many schools had already obtained some computers, and the need emerged for other school supplies; accordingly, we renamed our operation “School Improvement Project”.

In cooperation with Lauma Vlasova, the PBLA board member from Russia, TILTS supplied some computers for Latvian communities in Siberia in Lejas Bulāni, Augšbebri and Bašķīrija. Also, TILTS supplied five Braille printers to the Strazdmuiža school for the blind.

Thanks to everybody who contributed money and computers to help schools in Latvia, and thanks to those who started and managed the program. The program accomplished more than just collecting the $350,000 worth of equipment; some local municipalities followed the initiative and example of TILTS and provided computers to their schools on their own. And the efforts by TILTS served as an example to the young people of what can be accomplished by dedication and cooperation.

Organist Kristine Adamaite and saxophonist, the rector of the Music Academy Artis Simanis performed in a tour organized by Dace Aperāne in January and February:

The American Latvian Association (ALA) financially supported the concerts for the Latvian schools in Yonkers, Boston and Minneapolis.

The programs consisted of works by Latvian composers. The artists recorded a CD specifically with the program presented at this tour, called “Cantus Orationis”, which received high praise in the press in Latvia. The program included compositions by R. Dubra, M. Einfelde, P. Vasks, A. Vītoliņš and D. Aperāne. The CD is available from D. Aperane for $20, which includes shipping.

The Kultūrkapitāla Fund financially supported the travel expenses of the artists. Nevertheless, the tour’s budget had a shortage close to $100.

Violinst Vineta Sareika and pianist Inara Zandmane presented four concerts in November (organizers: L. Aldiņa, D. Aperāne, G. Zeidenbergs). This tour was undertaken at the request of the Latvian ambassador to the USA Andrejs Pildegovičs to provide a program for the diplomatic event in the Kennedy Center arranged by the embassy on November 19 in celebration of the 90th anniversary of the declaration of Latvia’s independence. The artists gave performances in:

This was the first TILTS’s tour subject to the new USA government regulations requiring P visas for foreign artists. Līga Aldiņa spent countless hours studying the regulations and filling out the forms, and it is only because of her efforts that Miss Sareika was able to come form Latvia to the USA and perform at the Embassy’s event (the pianist Zandmane resides in the USA). The tour had a shortage of $640. 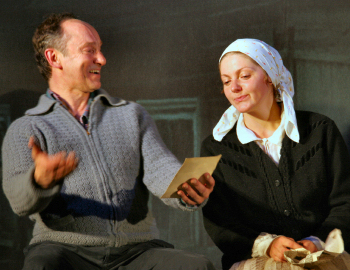 Māras Theatre from Riga with “Kronis 2” by Lelde Stumbre presented a set of performances on the US east coast in September, starting with Boston and ending with Minneapolis. The play was about two people in Siberia who discover that they both are deportees from Latvia. The two actors – Niks Ērglis and Māra Mennika – gave a very convincing performance, and response from viewers was positive, although some were disappointed about the sad subject. A total of approximately 1350 people saw the show. TILTS provided a car and a driver to transport the actors on their tour, and, with the financial support from ALA, receipts covered expenses.

The Sanfrancisco Little Theatre with “Meli un to piedošana” by Raimonds Staprāns gave performances in Boston, Yonkers, Priedaine, Washington, Cleveland and Toronto. TILTS arranged this tour at the suggestion of the Latvian Foundation, and the Toronto performance was part of the program for the annual meeting of Latvian Foundation membership. The play takes place in 15 scenes in Latvia in 1949 and is about the lies, betrayal, occupation, friendship etc.

Four actors from Sanfrancisco (Laimonis Siliņš, Brigita Siliņa, Māra Martinska un Andrejs Gulbis) un two form Latvia (Ivars Puga and Aīda Ozoliņa) participated under the direction of Laimonis Siliņš. The total audience was approximately 600. As with most tours of this type, TILTS provided a car and a driver to transport the actors, and, with grants from ALA ($3,500) and the Latvian Foundation ($2,000), receipts approximately covered expenses. Without these grants the tour would not have been possible.

Both tours were managed by Marcis Voldiņš.

Showing of the film “Rīgas Sargi” (Defenders of Riga) took place in Poughkeepsie on April 5 in the South Hills Mall theatre. According to the latest statistics, this has been the most popular of any local or foreign films ever shown in Latvia. In spite of the fact that this film had been recently shown twice in New York City, attendance at the Poughkeepsie screening was around 60. The screening was arranged by Andris Padegs, who gave also a short review of the complex historical events depicted in the film.

The Exceptional Young Artists Fund, under the leadership of Laila Robiņa and with the participation of Jānis Cigūzis and Baiba Pinne, in 2008 made grants with total value of $5,000 to:

The fund received in 2008 a total of $49,000 from the following generous contributors: Ilga un Kurt Blankmeyer, Māra Dole, Arkady Fomin un George Landegger. TILTS values very highly the support the contributors are providing to the exceptional young artists as well as the trust they have demonstrated in TILTS’s administration of the funds.

During its existence, the Exceptional Young Artists Fund has awarded a total of over $100,000 to over 30 young artists.

The fund’s current objective is to cover the expenses of Anna Žigure in the preparation of her book, originally called “Eslingena,” about the Latvian Displaced Persons (DP) camps in Germany following the Second World War. The current name of the forthcoming book is “Viņi”. Her plan is to cover the lives of people, in the form of a novel, after the people left Latvia in 1944-1945 to escape the advancing soviet army and before they left the camps for overseas countries around 1950. The manuscript is expected to be ready in the spring of 2009.

Contributions to the Fund can be made by sending a check, written to “Latvian Cultural Association TILTS, Inc.”, to TILTS, c/o Lilita Bergs, P.O. Box 67, Fabius, NY 13063.

To facilitate interaction with and among people who have moved to Latvia from the West, particularly among the members of TILTS, on July 3, jointly with The Canada-Latvian Business Association managed by Edvīns Kalviņš, TILTS arranged in Krastmala Lido a gathering of Latvians of the world. Participants were from the USA, Canada, Australia, Brazil, Venezuela, Great Britain, France, Holland, Germany, Sweden and Latvia.

The restaurant could seat 300, in view of the ongoing Song Festival 350 signed up, and 370 arrived. Some were unhappy with the crowds at the registration, but overall the event fulfilled its purpose. The new PBLA president Mārtiņš Sausiņš gave a short address, and later the Toronto folk dance group “Daugaviņa” performed.

To continue this tradition, a similar meeting is planned for the summer of 2009. With the help of board member Edvīns Kalviņš Riga company “Tehniskie partneri”, a meeting is planned for August 2, 2009 12:00 to 3:00 PM at the “Čarlestons” restaurant. This time there will be a strict limit of 150 seats, and therefore timely registration is advisable with the following: Ģirts Zeidenbergs, girtszeidenbergs@comcast.net, 001 302 529 7442, Skype: ‘girtszeidenbergs33’; Astrīda Jansone, astridajansone@yahoo.com; Velga Kalniņa velgakalnina@gmail.com; or Indra Sproģe-Kalviņa, indra.sproge@tpriga.lv, 371 6729 3361 or 371 2961 1205.