We would like to present here a brief review of our major activities of 2009 and our plans for 2010.

We are mailing this review to members of TILTS and also to many who are not yet members, particularly to those who have recently arrived in the USA from Latvia. One of the aims of TILTS is to help people of Latvian heritage preserve their culture and keep their Latvian identity, and one of the ways TILTS accomplishes this is by arranging tours of Latvian theatre and music ensembles.

We will continue to provide the cultural programs, but we have to face now two obstacles. First of all, the audiences of our concerts and theatre performances are shrinking, and for most tours income does not cover expenses. We need additional support, which we have been requesting from the American Latvian Association, from the Latvian Foundation or both. But we cannot always count on receiving it.

Starting with 2008, the USA government has introduced new regulations and procedures for the admission of performers from abroad by requiring Petition I-129/P and the possession of the P visa. The paperwork for the new procedure, which is stated to be for the purpose of homeland security, requires detailed information on the proposed tour and an approval by the respective US artist union. The procurement of the visa may take up to half a year and incur a cost of over $1,000. As a result, the process has to be started well in advance and has to consider the possibility of rejection, in which case performances and travel arrangements have to be cancelled. This places a significant burden on those arranging the tours and ads to the cost.

We will continue to arrange tours by artists from Latvia, but because of the additional work and cost we may have to forsake some opportunities.

We wish you a prosperous and healthy year! To those of you who have supported us in the past we thank you for your trust. To all who appreciate the value of Latvian culture, we ask for your support. Become a TILTS member and attend performances sponsored by TILTS. By attending such performances you are providing financial support for the tours and improving our ability to arrange visits by the most popular artists

Pianist Armands Ābols performed in six places in his May 2009 tour. The program included music of Latvian composers as well as world classics. He appeared in four cities under the auspices of Latvian organizations (Kalamazoo, Cleveland, Minneapolis and Chicago). In Rochester (MN) the concert was a part of the Festival of Music series. In Washington, D.C. he was invited to perform at the US-Baltic Foundation Celebration honoring H.E. Valdis Zatlers, President of Latvia, and also at the Embassy of Latvia for a select audience. 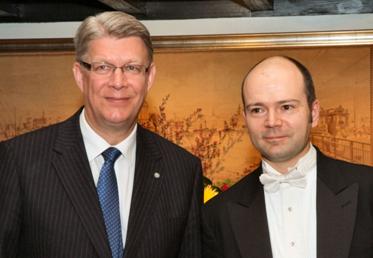 TILTS has organized tours for Armands Ābols since 1992 and has given audiences throughout the US opportunity to hear this amazingly talented pianist. In Rochester, where he appeared for the first time, the consensus was, “We were treated to a concert of a lifetime! Wow! What a talented musician! The power and music that came out of that piano was amazing, and yet almost seconds later the piano was overwhelmed with simplicity and gentleness.” The concert organizers are eagerly anticipating presenting more of Latvia’s outstanding musicians.

Since Mr. Ābols retains Latvian citizenship, the preparatory work included applying for the special professional musicians visa (P-3). Līga Aldiņš and the Latvian Embassy in Washington helped with the formalities. The documentation to the Musicians Union and Homeland Security totaled 76 pages with fees of $1570.

The tour incurred a small deficit in spite of support from ALA Kultūras Fonds with an award of $1200. The tour was organized by Astra Zemzars.

The Three Tenors – the tenors from the Latvian National Opera Miervalds Jenčs, Nauris Puntulis, Guntars Ruņģis with the pianist Gints Bērziņš participated in one of the most extensive tours ever arranged by TILTS, performing in 18 Latvian centers. This was their third TILTS tour. It started in the Catskills Latvian camp on August 22, then the artists covered the Latvian centers on the East Coast before heading to Seattle, San Francisco and Los Angeles, and the tour ended with a concert in Florida.

The tenors presented opera arias as well as some popular music and were very well received. A total of over 2000 people heard them. Income from the tour covered all expenses. The tour was organized by Jānis Bībelnieks un Jānis Students

The tour was well received, and a total of some 760 people saw the show. Income from the performances, however, did not cover expenses, and TILTS had to contribute over $3,000.

Teātra TT tour with a play by Lauris Gundars „Tiritomba jeb Zelta Zivtiņa” took place in October and covered seven cities: Portland, Seattle, San Francisco, Denver, Minneapolis, Priedaine and Washington D.C. The Latvian ambassador invited the actors to visit the embassy before the performance in Washington, and the actors appreciated the opportunity to meet with him.

The play is about comical misunderstandings when a lonely woman comes to a cafe to meet a man she found through a marriage add in a paper. The actors were from different Latvian theatres –Velta Straume and Juris Strenga from Dailes Theatre, Anna Putniņa and Arnolds Osis from Valmieras Theatre. The director was the author Lauris Gundars. A total of some 530 people saw the show, which was well received, particularly the professional level of acting.

Even with the support of $2,000 from the Latvian Foundation the tour incurred a significant deficit.

Māra Theatre tour with the play “Kronis 2” by Lelde Stumbre was planned on the West Coast, but had to be cancelled because of difficulties with petition I-129/P formalities. TILTS had requested P-3 visas for both actors, and the petition was approved. But when the actors arrived in Minneapolis from Europe on their way to the West Coast, they did not have the paperwork with them. After a difficult and degrading questioning the immigration authorities did not let them proceed and placed them on the next return flight back to Europe. This tour is now planned to take place in the spring of 2011.

This was a painful reminder that the US immigration authority requirements need to be fulfilled literally. TILTS expenses associated with this failed tour were $4,797, of which $4,631 were incurred in 2008..

All theatre tours were organized by Marcis Voldiņš.

The Exceptional Young Artists Fund, under the leadership of Laila Robiņa and with the participation of Baiba Pinne and Anna Ķepe (Anna has replaced Jānis Cigūzis), in 2009 made grants with total value of $42,300 to the following young artists:

In 2009 the Fund received a total of $9,000 from the following generous contributors: Māra Dole and Ludmilla Loane. TILTS values very highly the support the contributors are providing to the exceptional young artists as well as the trust they have demonstrated in TILTS’s administration of the funds. At the end of the year the fund balance was $13,035.

In its lifetime, the Exceptional Young Artists Fund has awarded a total of over $150,000 to over 30 young artists.

The fund’s current objective is to cover the expenses of Anna Žigure in the preparation of her book about Latvians leaving their homeland during the Second World War and their life in the Displaced Persons (DP) camps in Germany. The author has now collected so much material that two volumes are planned. The first volume “Viņi. Ceļā” was published by Jumava in December of 2009 and was sold out by February of 2010. A new edition is forthcoming. The ALA Education Department is using this book for its reading program.

To facilitate interaction with and among people who have moved to Latvia from the West, particularly among the members of TILTS, on August 2, 2009 TILTS arranged a gathering of Latvians of the world at the Čarlestons Restaurant in Rīga. The meeting was organized by Ģirts Zeidenbergs with the help from board member’s Edvīns Kalviņš company “Tehniskie Partneri”.

In 2009 TILTS board awarded a total of $6,500 as follows (this does not include awards by the Exceptional Young Artists Fund nor by the History Projects Fund):

The following table summarizes TILTS 2009 receipts and disbursements These are funds that have actually been received and paid (cash basis).

We plan most of our cultural events so that they would pay for themselves. This, however, is becoming more and more difficult, as most of our artists are from Latvia and the size of our audiences keeps shrinking. We also need contributions for our projects associated with support of education and other cultural activities. No TILTS board member receives any compensation for any of her/his services.

Please help us carry out our programs and become a member of TILTS. Donations for TILTS membership start at $15.00. Please make the check payable to “Latvian Cultural Association TILTS, Inc.” and forward

In the USA, donations to TILTS are tax-deductible.

We are gratified that, with our support, the President of Latvia has bestowed recognition to the following:

Participate in the election of the 10th Saeima on October 2! Only those with a valid Latvian passport will be able to vote. Check the validity of yours!

TILTS is advising its board members to request their local Latvian organizations to form task forces that would assist local Latvians to obtain rights to vote by mail without having to mail their passports through the US mails.