Here, with some delay, is a review of our 2010 activities and plans for this year and next.

Our organization was founded in 1968 by a group of Latvians who gathered to commemorate the 50th anniversary of the foundation of the state of Latvia with a presentation, concert and refreshments at Vassar College. Since then the name of the organization has changed from the original “Poughkeepsie Latvian Association” to “Mid-Hudson Latvian Association” until in 1988 we adopted the current name “Latvian Cultural Association Tilts” to more closely reflect our endeavor to establish and maintain cultural contact with Latvia.

We started to establish contact with Latvia at a time when such contact with the country still behind the Iron Curtain was not generally approved. We did it because we felt we needed to be in touch with our roots and because those in Latvia resisting the Soviet occupation needed our support, even if only moral. After Latvia had restored its independence, we provided material support, including the gift of a printing press to the Culture Fund lead by Imants Ziedonis and the collection and shipment of some 60,000 books.

One of the core thrusts of our organization has been fostering the preservation of Latvian identity among Americans of Latvian descent by arranging cultural events. In the last 20 years our programs have consisted mostly of performances by ensembles from Latvia, and we plan to continue arranging such tours. However, we have to face now two types of difficulties. First of all, the attendance at Latvian cultural events has shrunk to the extent that receipts from the events do not cover the expenses of the tours. We have to request financial support from The Latvian American Association, The Latvian Foundation or both. The trouble is that we cannot always count on receiving such support.

Second, starting with 2008, the USA government has introduced new regulations and procedures for the admission of performers from abroad by requiring Petition I-129/P and the possession of the P visa. The paperwork for the new procedure, which is stated to be for the purpose of homeland security, requires detailed information on the proposed tour and an approval by the respective US artists union. The procurement of the visa may take up to half a year and incur a cost of over $1,500. This places a major burden on those arranging the tours and adds to the cost, since we face the possibility of a rejection of the visa after commitments for tickets and facilities have been made.

We will comply with the  requirements and continue to arrange tours by artists from Latvia, but because of the additional work and cost we may have to forsake some opportunities.

We wish you a prosperous and healthy year! To those of you who have supported us in the past we thank you for your trust. To all who appreciate the value of Latvian culture, we ask for your support. Become a TILTS member and attend performances sponsored by TILTS. By attending such performances you are providing financial support for the tours and improving our ability to arrange visits by the most popular artists. 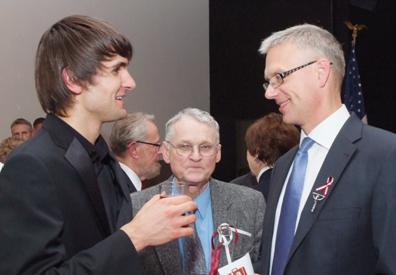 Vestards Šimkus chatting with Krišjānis Kariņš, the speaker at the Latvia's independence-day celebration in Philadelphia, organized by the Free Letts Society. In the back is Ģirts Zeidenbergs.

At the request of Andrejs Pildegovičs, ambassador of Latvia to the USA, TILTS undertook to provide the musical program for the event arranged by the embassy to commemorate the foundation of the state of Latvia on November 18, 1918. The commemorative event took place in the Library of Congress in Washington, DC.

TILTS invited Vestards Šimkus, who had just returned from concert tours in China and Norway, and additionally arranged concerts in Cleveland and Philadelphia to give more people the opportunity the hear this world-renowned pianist.

The tour by Vestards Šimkus was organized by Astra Zemzars and Ģirts Zeidenbergs, including the procurement of the P-3 visa. Approximately a total of 750 people heard Mr. Šimkus play.

In spite of the fact that Latvia’s Kultūrkapitāla Fonds supported the concert with a grant of 500 lats ($955), the expenses of the tour did not cover receipts, and TILTS had to cover the deficit of almost $2,000.

The History Projects Fund in 2010 was managed by Lilita Bergs with the assistance of Aivars Keire and Baiba Pinne. The Fund’s current objective is to cover the expenses of Anna Žigure in the preparation of her book about Latvians leaving their homeland during the Second World War and their life in the Displaced Persons (DP) camps in Germany.

The first volume “Viņi. Ceļā” was published by Jumava in December of 2009 and was sold out by February of 2010. A new edition is forthcoming. The ALA Education Department is using this book for its reading program. The author is now working on the second volume, to be called “Viņi. Svešos pagalmos", to be published by the end of 2011.

In 2010 new funds were not solicited and have not been received. The value of the Fund currently is $200, and a total of $5,650 has been paid to Mrs. Žigure. The Fund disburses only money that has been specifically donated to the Fund. 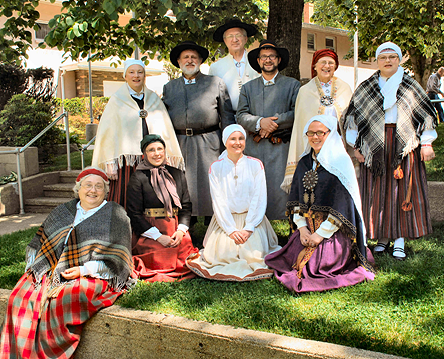 The Latvian folk ensemble “Teiksma” from Minneapolis, MN, performed in Latvian centers on the East Coast in May, 2010. The members of the group sang Latvian folk songs, accompanied by accordion, violin and the traditional Latvian folk instrument kokle.

The concerts took place at the Estonian House in New York City on May 14, at the New Jersey Latvian School in the morning of May 15, in the facilities of the Philadelphia Latvian Church in the evening of May 15, and in Priedaine on May 16. After each concert the audience joined the performers for joint singing.

Even though the Association of Latvian Organizations of Minnesota supported the tour with a grant of $1,500 and each of the three concerts yielded $1,000, the receipts of the tour did not quite cover expenses.

The Exceptional Young Artists Fund, under the leadership of Laila Robiņa and with the participation of Baiba Pinne and Anna Kepe (Anna in 2009 replaced Jānis Cigūzis), in 2010 made grants with total value of $5,000 to the following young artists:

In 2009 the Fund received a total of $650.  TILTS values very highly the support the contributors are providing to the exceptional young artists as well as the trust they have demonstrated in TILTS’s administration of the funds. In its lifetime, the Exceptional Young Artists Fund has awarded a total of over $150,000 to over 30 young artists.

To facilitate interaction with and among people who have moved to Latvia from the West, particularly among the members of TILTS, on June 27, 2010 TILTS arranged a gathering of Latvians of the world at the Čarlestons Restaurant in Rīga. Ingmārs Čaklais, the head of the Riga Latvian Society, gave an overview of the activities of the Society.

The meeting was organized by Ģirts Zeidenbergs with the help from board member’s Edvīns Kalviņš company “Tehniskie Partneri”.  Among attendees were people from the USA, Australia, Canada, France, Italy Germany, Sweden and Latvia.

Immediately after the gathering 40 attendees had the unique opportunity to watch the play “Mrs. Benjāmiņa, how a modern person should live”. The show took place in the original house of Mrs. Benjāmiņa, and was very much appreciated.

To continue this tradition, a similar meeting is planned for June 26, 2011 12:00 noon to 3:00 PM, same place. There will be buffet type food, admission will be around 15 lats. Uldis Grava has agreed to review the current status of the changes considered in the law allowing double citizenship. The facilities have a strict limit of 150 seats, and therefore timely registration is advisable with the following: Ģirts Zeidenbergs, girtszeidenbergs@comcast.net, or girtszeidenbergs@gmail.com, Skype: ‘girtszeidenbergs33’; Astrīda Jansone, 371 6729 7157; or Velga Kalniņa velgakalnina@gmail.com.

In 2010 TILTS board awarded a total of $3,300 as follows (this does not include awards by the Exceptional Young Artists Fund nor by the History Projects Fund):

On the Subject of Theater Tours

TILTS did not organize any theater tours in 2010, as it could not make arrangements with any theater company from Latvia that would meet all of our requirements – not more that five performers with a suitable play and acceptable stage requirements.

Another problem with theater tours is financial – the income from a tour normally does not cover its expenses. One source of additional support is the Latvian Foundation, but our schedules do not match – the LF expects proposals for funding in March, with the membership voting on them in late summer and the results being announced in the fall. But in March we do not yet know, what ensemble and play we could possibly get for the next season!

In March of 2011 we requested LF funding for the 2011-2012 season without mentioning the play. We trust that the LF membership will be willing to vote for our request without knowing the specific play.

The following table summarizes TILTS 2010 receipts and disbursements. These are funds that have actually been received and paid (cash basis). 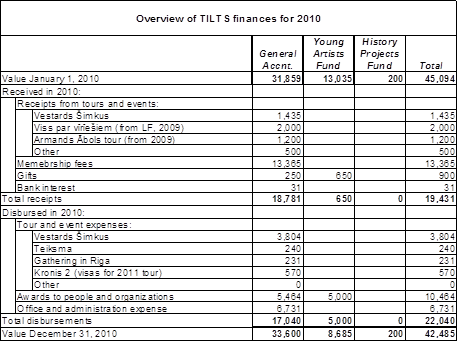 We plan most of our cultural events so that they would pay for themselves. This, however, is becoming more and more difficult, as most of our artists are from Latvia and the size of our audiences keeps shrinking. We also need contributions for our projects associated with support of education and other cultural activities.

Please help us carry out our programs and become a member of TILTS. Donations for TILTS membership start at $15.00.

In the USA, donations to TILTS are tax-deductible. No TILTS board member receives any compensation for any of her/his services.