Here is a review of our 2012 activities as well as our plans for this year and next. On the following pages we describe the events and the performances we have arranged, but, additionally, here we would like to give you an insight into the issues we face in selecting the artists and arranging their tours.

Great changes have taken place within the last 50 – 60 years. When many years ago the “Saules Josta” ensemble visited us from Australia, the performance in the New York area drew some 600 spectators and probably even a bigger audience in Toronto. Receipts from such a tour easily covered expenses. On the other hand, our recent carefully planned and well-advertised “Gūsteknis pilī” tour, where the attendance ranged from 31 to 184, had a deficit of over $2,000 even after $11,000 support from central Latvian organizations.

What are we doing to balance the budgets? A major part of the expense is for travel – airfare and car rental for our recent tour came to $3,500 per person. There is not much we can do about it except try to limit the number of travelers. But a major expense is also the artist’s honorarium. Whereas a professional artist in the USA would expect $1,000 and more for each performance, TILTS attempts to arrange tours with outstanding artists for whom financial profit is not the main objective of an American tour. Even though the honorariums in Latvia are lower, they still add up to a significant amount. Therefore, we are thankful to artists from Latvia who are willing to present high-quality performances for less than the market price. The honorarium of actors in “Gūsteknis pilī” came out to $71 per actor per performance. This was really a gift the audience. It should be noted that for an ensemble of five artists participating in a tour of 10 cities each $20 in the honorarium adds $1,000 to the budget.

In order to reduce the relative cost of travel, we are always attempting to maximize the number of cities included in a tour. On the other hand, places with small attendance do not cover the expenses. Another problem is that popular artists cannot afford the time to spend a month on an American tour.

The unavoidable result is that income from a tour usually does not cover expenses, and it is necessary to secure some outside support. TILTS is grateful to the American Latvian Association, Latvia’s Kultūrkapitāla Fund and to Latvian Foundation for their recent support. Such support will be needed also in the future.

We mail this report to all members of TILTS and, additionally, we provide either soft or hard copy to people who are not yet members. We wish you a prosperous and healthy year! To those of you who have supported us in the past we thank you for your trust. To all who appreciate the value of Latvian culture, we ask for your support. Become a TILTS member and attend performances sponsored by TILTS. By attending such performances you are providing financial support for the tours and improving our ability to arrange visits by the most popular artists.

“Dailes” Theatre tour with Raimonds Staprāns’ drama “Gūsteknis pilī” took place August 20 to September 20, 2012, covering 13 cities in the USA, plus Toronto. The tour started with four cities in California and ended in the East in Priedaine, NJ. The show had seven actors, plus the director Kārlis Auškāps, who gave a short speech before each performance and from then on became a stagehand helping with lights and sounds. 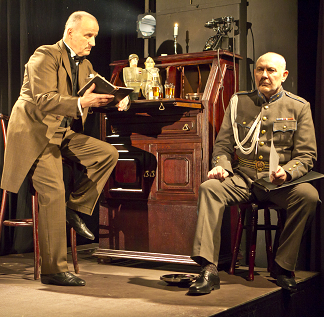 This was one of the biggest TILTS tours, and, according to the “official” data from the organizers of each performance, the show was viewed by a total of 1,283 people. The tour was big in the number of cities and viewers as well as TILTS’s budget – $33,471 (this did not include the income and expense of each performance). ALA supported the tour with an award of $5,000, Latvia’s Kultūrkapitāla fonds with $1,429 and Latvian Foundation with $4,650. In spite of this outside support, TILTS had to cover a deficit of over $2,000, and some of the smaller places had to contribute from their own funds to cover the their share of TILTS expenses.

The drama “Gūsteknis pilī” is about the last days of Latvia’s president Kārlis Ulmanis in his office in the castle of Riga after the invasion by the soviet army. Raimonds Staprāns wrote the play based on the recollections of Oskars Neimanis, the commander of the castle. It describes the conflicts of the day and the difficult and controversial decisions Ulmanis had to make, as imagined by the author. Even if some viewers may have felt that the president was depicted as too indecisive, most appreciated and praised the performances.

Thanks to the local organizations arranging the performances and thanks to everybody for the financial support. The tour was arranged by Marcis Voldiņš. 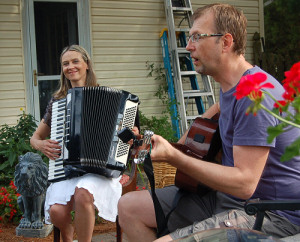 “Lauku Muzikanti" with Normunds Ķietis un Inita Āboliņa performed for 500 attendees at the 2012 St. Johns festival in Priedaine, NJ, arranged by the New Jersey Latvian Society. TILTS supported the artists with a grant of $1,000 for the expense of P3 visas and organized concerts in Boston on June 21 and in Washington, DC on June 27, with an audience of 80 in each of these concerts.

These artists had visited us before, and their concerts always have been appreciated and well attended. 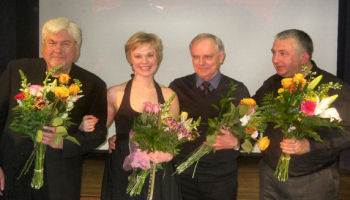 This tour was dedicated to the memory of Rūta Grava, a member of TILTS board who died in 2011. It was financed in part by funds contributed to TILTS in her memory, a total of $5,310. The receipts from the tour, however, did not cover the expenses of $15,825, and TILTS had to contribute almost $4,000 to cover the deficit

Dace Aperāne organized the tour. This was the first tour that TILTS has arranged in cooperation with The Latvian State Agency “Latvijas Koncerti” (www.latvijaskoncerti.lv). 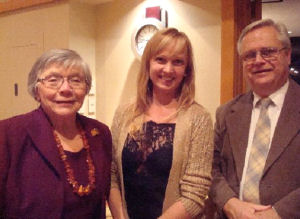 Violinist Una Tone presented three concerts at Latvian communities in October of 2012. In Cleveland and Detroit the pianist Rūdolfs Ozoliņš accompanied Una and ALA supported the concerts; in Minneapolis the concert was supported by the Minneapolis Latvian Association and the pianist Gunta Kalmīte-Skujiņa provided accompaniment.

The programs included compositions by Latvian and other composers, and the concerts were well attended. The reviews were very favorable – “Una Tone has complete control over her instrument, and her interpretation was inspiring”.

The History Projects Fund awards funds that have been specifically contributed to one of the history projects managed by TILTS. In 2012 there were two such projects: 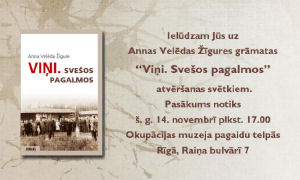 Anna Žīgure book “Viņi”. This project was established in 2006 to cover the expenses of Anna Žīgure in the preparation of her book about Latvians leaving their homeland during the Second World War and their life in the Displaced Persons (DP) camps in Germany. The first volume “Viņi. Ceļā” was published by Jumava in December of 2009. The second volume, “Viņi. Svešos pagalmos", was published in 2012. The Fund has awarded a total of $6,050 to Mrs. Žīgure. The Fund does not solicit additional money for this project.

Book About Music Camps. This project was established under the leadership of Dace Aperāne to support the book by the Latvian Academy of Music and the publisher Musica Baltica about the International Latvian Young Musicians’ Camps - Master Classes. The camps were held in Canada from 1985 to 1990 and in Latvia since 1994 for a total of 13 camps. Some 1,250 young musicians have attended these camps, with faculties consisting of outstanding professionals from Latvia and other countries.

The book was released during the X International Latvian Young Musicians Camp on July 15, 2012 in the Sigulda School of Arts. The Fund has received a total of $50, which was used to cover part of the expenses of the publication. The Fund does not solicit additional money for this project. 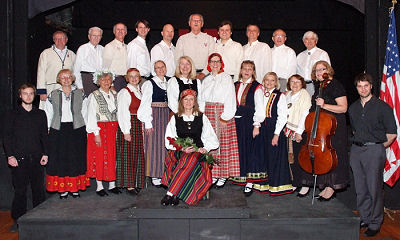 The Exceptional Young Artists Fund, under the leadership of Laila Robiņa and with the help of Baiba Pinne and Anna Ķepe, in 2012 made grants with total value of $2,100 to:

In 2011 the Fund received $150 in donations. TILTS values very highly the support the contributors are providing to the young artists as well as the trust they have demonstrated in TILTS’s administration of the funds. In its lifetime, the Exceptional Young Artists Fund has awarded a total of over $150,000 to over 30 young artists. The Fund makes awards only from contributions donated specifically to this Fund. Contributions to the Fund can be made by sending a check, written to “Latvian Cultural Association TILTS, Inc.”, to TILTS, c/o Laila Robins, 241 Central Park West Apt. 14H, New York, NY 10024.

TILTS has been supporting the International Latvian Young Musicians’ Camps - Master Classes for many years. From now on the support will be through the Music Camp Fund, managed by Dace Aperāne with the participation by Anda Sūna Cook and Gunta Semba. The immediate purpose of the fund is the support of the XI International Latvian Young Musicians’ Camps - Master Classes that will take place June 30 to July 9, 2014 at the Sigulda School of Arts “Baltais Flīģelis”.

Contributions to the Music Camp Fund can be made by sending a check to TILTS Treasurer, written to “Latvian Cultural Association TILTS, Inc.”, with a note explaining its purpose.

In 2012 TILTS board awarded a total of $2,450.00 as follows (this does not include awards by the Exceptional Young Artists Fund nor by the History Projects Fund):

In the past we have planned most of our cultural events so that they would pay for themselves. This, however, has become impossible, as the size of our audiences keeps shrinking and the expenses for artists from Latvia keep rising. We also need contributions for our projects associated with support of education and other cultural activities. We have not increased membership dues so that the amount of the dues would not be an obstacle for those with limited resources.

Please help us carry out our programs and become a member of TILTS! Donations for TILTS membership start at $15.00. Make the check payable to “Latvian Cultural Association TILTS, Inc.” and forward

In the USA, donations to TILTS are tax-deductible. No TILTS board member receives any compensation for any of her or his services.